The Allure of La Playa

The last two weeks have passed by in a hot shimmering haze of sea, sun, rum and limited clothing as I've slowly sauntered down the sand-strewn path to beach bum town. In simple terms: I went to the beach. And got stuck there. Firstly a birthday week in Montanita, Ecuador followed by another sandy semana in Mancora, Ecuador.

This blog, I'm sure you'll be glad to hear, will be a short one because what happens on the beach stays on the beach. Or, to let you in on a little secret, nothing actually happens on the beach. It's a sunny black hole that sucks you in and has a long chew before even thinking about spitting you out again. A dangerously idyllic alternative universe devoid of the rules and restraints that govern life in the real world. There'll be no enthralling tales of outlandish treks to sites of ancient wonder here, no illuminating odes to buzzing cities or quaint colonial towns. These things don't exist nor do they have any worth within the beach bubble. What counts and what occurs is the following, the allure of la playa:

'Welcome! Remove your footwear. Are those clothes you're wearing? How funny. You won't be needing them any more. Nor your intricately worked-out travel plans for the following month. Have a drink. You deserve it. And get comfortable. You'll be here a while.'

So marks the travellers arrival at a beach 'party' town, and so begins an alarmingly-quick recalibration of lifestyle and outlook. Time moves slowly, yet days slip by unnoticed. Priorities shift, worries dissipate. Late nights, lost mornings. Sand. Gets. Everywhere.

Everything revolves around la playa. A leisurely stroll after a shirtless afternoon breakfast to reach the shore and spend a few hours of horizontal socialising and sunbathing with your fellow coastal refugees - those who have also recently entered this fantasy world and learnt the new truth. This shared awakening and shift in perspective has made new best friends out of all of you. Some are here to surf which adds an extra focus towards the sea. Swimmers and bobbing bathers join the ranks. 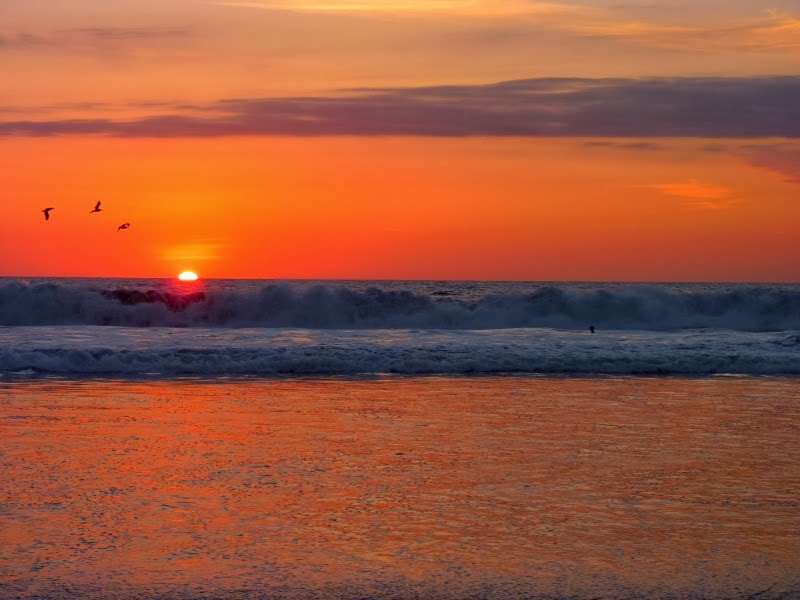 Most importantly there's the obligatory open-mouthed contemplation of sunset. A communal evening gathering with all eyes tracking the great glowing orb's final descent beneath the watery horizon. A universal sense of awe the reasoning for which it can be hard to verbalise but likely rooted in the constant semi-conscious knowledge that we are all individually minuscule in an unfathomably giant universe. Prolonged consideration of an astral, life-giving object 100 million miles away opening doors in the mind that are often sealed shut by priorities far less deserving of attention. Worshipped as a deity by early civilisations, the importance of the sun as the creator and maintainer of all life on earth has been understood almost as long as human beings have been around, lending a further evolutionary explanation to our innate sense of awe when regarding it. A feeling amplified on the beach as the fiery ball is slowly extinguished beneath the distant waves. An unspoken group meditation; each gazing across the never-ending sea, silently contemplating the rest of this far-reaching world and their place within it. Also sunsets are pretty cool and a good excuse for a beer. 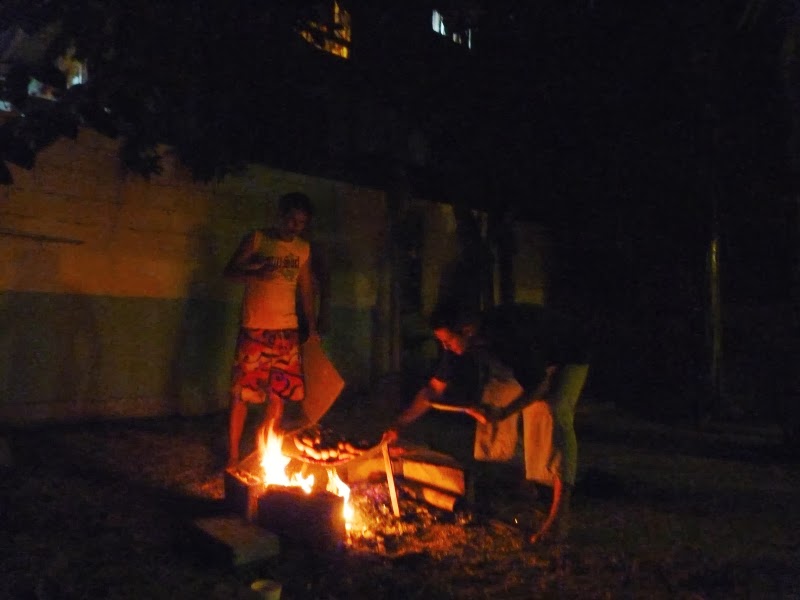 The central role of the beach continues after dark. Coastline bars and clubs spill revellers onto the sandy shores, liberated by hip-notic Latin beats and barefoot dancing. Later still, numerous fires are built and another primal human desire draws people in - a deep-seated need for warmth, food, shelter and company. Except in this scenario the fire stokes drunken sleepy conversation, sharing of low-quality marijuana, group-guitar playing and non-native English speakers singing badly-pronounced Beatles songs. Those who can't drag themselves away from the shore to sleep, pop up a tent for the night and remain beachbound for the duration. Morning comes, the beach beats it's alluring drum once again and the cycle continues. Occasionally the exact playa changes as a quest for perfection encourages movement; a sandy spot more untouched, more beautiful and less-frequented by others. This slight shift in location being the only real change in environment.

Almost as important as sand beneath the toes is booze in the face. Alcohol and the beach go hand-in-hand and this close relationship creates these 'party town' reputations. The disconnect from the real world further fuels the fiesta: Everyone is living a fantasy - any niggling worries or second thoughts about consuming two bottles of rum a night don't apply here. How can something so deliciously fun in such paradisical surroundings be a bad idea? $5 for a bottle? You'd be stupid not to. Lime, cola, ice... oblivion. It's impossible to find anyone without a permanent smile spread across their chops though, so maybe they're onto something. 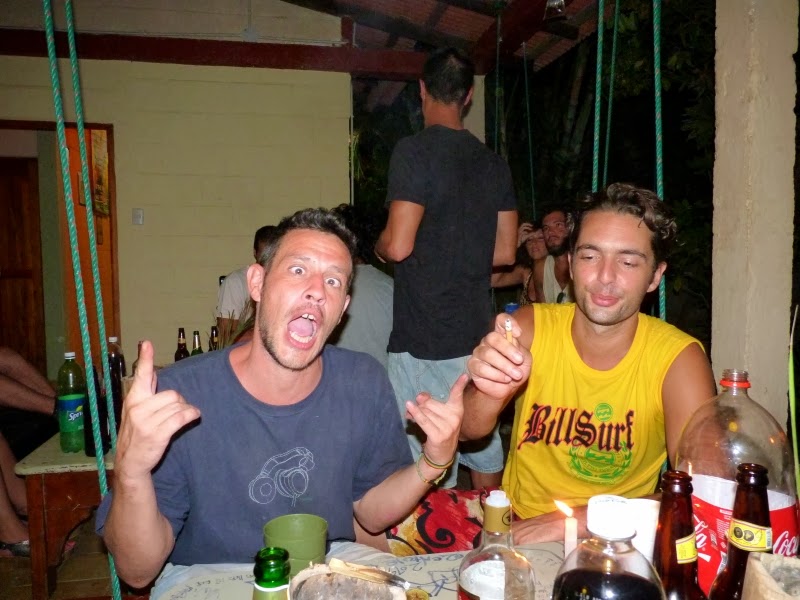 This lifestyle isn't such a problem if you're only passing through for a crazy weekend, but we've already covered the difficulties in leaving and if you're around for any longer than a week the excess can get, well, excessive. It's always somebody's first or last night, or another vague excuse for a celebration, and anyone not sipping on ron y cola after sundown is regarded with suspicion and confusion. All vices are by definition difficult to resist, but at the 'no-worries, be-happy' beach party town this effect is greatly heightened. Peligroso.

The heady atmosphere, free-flowing booze, drugs, sex and good vibes have a noticeable influence on romantic matters too. A three year relationship is often condensed into three days, spurred on by an intoxicating sense of freedom; sun-soaked, sand-covered steaminess and the constant knowledge that the 'rules' no longer apply. Couples declaring love within hours of meeting, changing travel plans, delaying departure dates, planning a new life on the beach together. Short, intense pain as things get 'too serious', the relationship deteriorates within the week and a handsome newcomer catches the eye. A process repeated with someone else the next evening.

Reluctance to leave such an environment is pretty much universal and the anchors have set firm within a couple of days. Yet, a vague encroaching recollection of external responsibilities, a pre-booked flight, or the nagging knowledge that you really should visit Machu Picchu while you're in the area means that most people manage to drag themselves away after a week or two. But then there's the Hardcore. The real Beach Bums. Those that really obviously should have left a long, long time ago. The first stage of such indoctrination is a hostel or bar 'job'. Really just an excuse to cut expenses on sleeping and drinking (the only two necessities at the beach). Stage one usually lasts a month or two, after which it's still not too late to safely stumble back to reality.

However, not all take this exit, some continue down the path to full Beach Bum. These folk are easy to spot thanks to their half-baked dreadlocks and poorly-made bracelets for sale. Not a lot of hygienic processes are followed, many sleep on the street as the accommodation budget has long since been expended. Funds are meagrely replenished by selling tat or through awful busking that forces people to pay if only to stop the aural abuse so they can eat their dinner in peace. Any money made is spent on maintaining a constant state of semi-drunkenness. These people are basically tramps but with handicrafts for sale. Artisan tramps. A nice tan but the down-side of impending cirrhosis of the liver. I'm not sure if there's a way back from here, or what the next stage might be. The time to leave was long ago.

Having said that, maybe they're doing it right. Possibly my critical outlook stems from the fear that prevents me fully committing to this lifestyle (ideally with slightly less alcohol abuse). Instead of constantly looking for answers, maybe we all need to stop asking questions and just live on the beach. Give in fully to the allure of la playa. Perhaps that is the answer.

I don't think I can do it though. Intense irritation and internal rage are automatically triggered whenever I see anyone banging on a stupid, portable drum. A personal reassurance that I've never gone too deep and a suggestion that maybe I'll never be able to. Regardless, it was still a very painful and drawn out process to walk away from the feel of sand underfoot, the sight of moonlight shimmering across the water and the sound of gently lapping waves. A flight to Patagonia for a new tour job was the immovable reason for my obligatory departure. Despite the deep reluctance and heartfelt yearning to stay, in the back of my mind I knew it was probably for the best. Before two weeks became two months and the return path from full Beach Bum became increasingly difficult to navigate.

The bump into reality was sudden and unforgiving. Beginning immediately on boarding the bus back to civilisation. "You need to put a shirt on, senor". Begrudgingly accepted. "And some form of footwear". Now this is getting ridiculous! Do you not even know the new rules!? Having not worn anything on my feet or torso for two weeks, this felt like quite a strict request. As these and other real-world regulations and responsibilities gradually flickered back into existence, it felt somewhat like emerging from a dream. Reluctant and foggy-headed, shaking sand from belongings, rum from the mind and slowly relearning how life away from the beach works. No one wants to take this step back to reality, all the while understanding on some level that it's probably necessary. In a few days and weeks, behaviours and beliefs are realigned and the beach-world seems like a distant imagined land. Did that even happen? A trace of memory remains. Sufficient to know that yes, it did, and I'll return soon. I have to. Just for a couple of days, mind.