What does one need after the at-times-challenging nature of a Trans-Siberian railway journey followed by three weeks in the craziness of China? Sun, sea and sand may provide an answer....

Kate & I were reunited on the Indonesian island of Bali and spent nearly a month island-hopping and beach-bumming in and around this idyllic paradise. However, no one wants to read a blog recounting sand-strewn tales of rotating like a hog on a spit in the sunshine. Instead, we'll focus on the main reason we found ourselves in this part of the world in the first place: The joining together in matrimony of our wonderful friends DB and Sarah. 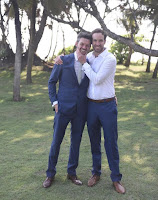 If additional justification is needed, it seems very fitting to have DB's wedding featured on this blog as we actually first met when travelling through South America in October 2011 - in fact, if you have too much time on your hands, you can scroll back to the entries from late 2011 and early 2012 to find his name mentioned and face appearing numerous times. DB has since become one of my closest friends and I was hugely honoured (and surprised!) to be asked to take on Best Man duties on his special day. If someone had told me seven years ago that I would one day be Best Man-ing for the guy I just met in a Colombian hostel, I would have recommended you reduce your intake of that country's most famous export. Funny old life.

To keep things novel, the main chunk of this blog will be taken up by the speech I gave on the day itself - I am sharing this publically with the kind yet inexplicable blessing of both DB & Sarah. One vital thing to know before you read on is that Sarah is of German heritage and many of the guests on the day were from that fine country... bet you're worried now, ey!? Here we go....

Ladies & Gentleman. Meine Damen und Herren. I was a bit nervous about this speech so did a lot of research and stumbled upon a top tip that the Best Man shouldn’t speak for any longer than it takes the groom to make love. Thank you very much and enjoy your evening….

I hope you enjoyed that because it is just the first of many terrible jokes coming your way over the next two and a half hours…..

For those of you that don’t know me, I’m James and I have the honour of being one of David’s best men. I got the short straw and hence standing before you now!

Before we begin the traditional groom-roasting, I just wanted to give a shout out to the speakers who went before me - Eberhard and Bella – weren’t they fantastic!?

Most importantly, can I just say how incredible Sarah looks today….
Sarah, you look simply stunning. David, you just look simple and stunned.

It would be remiss of me to not also mention the beautiful bridesmaids. I think I’m speaking for everyone here when I say we were all blown away when the wedding party walked down the aisle earlier. It’s been an emotional day all-round really….. even the cake is in tiers.

It’s great to see so many of you here today – it reflects very positively on Sarah & David that everyone has made such long journeys from the UK, Europe and further afield to share in this special day. I read on your wedding website that you chose Bali as the location as it is exactly halfway between London and Sydney…. I think everyone is wondering was your 18 hour flight here?

I do feel like a bit of an imposter up here, having only met David seven years ago. This means I have no material on the first 27 year of his years…. Fortunately, there were plenty of people on the stag do who were MORE than willing to share stories from these earlier years. Unfortunately, absolutely none of those stories are suitable to share here today....
Unless, any of you really want to hear one? That sounds like quite a resounding yes!

How many of you have heard about the time David made the (frankly stupid) decision to cycle 700 miles in seven days from London to Geneva…. I’m sure he has regaled you all with self-aggrandising stories about this gladiatorial feat of endurance. One detail he may have left out though is his discovery that seven days straight in the saddle, cycling every waking hour, can somewhat impede your ability to achieve an erection afterwards. When I say ‘afterwards’ – I mean for a period of six months afterwards.
All I can say is that it's a huge relief the two of you didn’t meet during this rather limp period of David’s life. Everything OK now though, mate….?

Quickly moving on… I would like to attempt to immediately redeem our friendship by taking this opportunity to help David learn some key phrases in German. To really help develop deeper relationships with his new family members.
How does that sound, David? There is going to be some interactivity here…

Did you know that there are 1200 types of sausage in Germany? Which goes some way to explaining the astonishing number of common sayings with a strong emphasis on our piggy friends.

Here's an example: If you and Sarah end up attending any tedious parties in your new lives together, once you get home you can look Sarah in the eye and say Kein schwein war do. Your turn to try, David. This phrase is a way of complaining that attendance at a party was poor. But it literally translates as, “There weren’t any pigs there”. In most cultures, the absence of pigs at a party would be a positive thing. Not so in Germany.

Next phrase: Das ist mir wurst. Try that one, David. This is a way of saying "I don’t care at all". However, the direct translation to English is “That’s sausage to me”. Quite ironic considering that Germans clearly do care a lot about their sausages.

Finally, this one might be my favourite. Something that could come in handy on those rare but unavoidable occasions in any relationship when you're not quite getting along perfectly…
Sie spielt die beledidigte leberwurst. This is a tough one and don't worry too much about getting it right, David, as I hope you don’t ever need to use this. This is what you say to a person who has got themselves all worked up, or to translate literally, “She’s playing the insulted sausage”.

I feel I may have outstayed my welcome now, but before I sit down, I’d like to end with a ‘serious bit'...

When travelling, you meet hundreds of people and these relationships all serve a transient purpose and you never see each other again. That's just the way it works. However, with the exception of the rowdy girls on the table over there, David is the only ‘travelling’ companion I’ve ever had that has become a true friend.

Our first meeting at a fancy-dress party in Colombia on Halloween – David dressed as a cat wearing a pair of tights, me a budget Batman in a bin liner – I think we initially dismissed each other, perhaps accurately, as complete idiots. However, a couple of weeks later when we found ourselves together again, sitting on the floor of a shared dormitory, drinking warm whiskey miniatures in our pants…. I knew I had a friend for life.

To be standing here today is an absolute honour and a privilege. I couldn’t be happier to have remained in your life, to have met the wonderful Sarah, and to be here sharing this perfect day with you both.

Now, I think it is finally time for me to, as they say in German, Nicht lange schnacken, kopf in nacken - Stop talkin’ and start drinkin’!

So, ladies and gentlemen, meine damen und herren, please can I ask you to all raise a toast to friends for life, to love, and most importantly, to the new Mr and Mrs Brown. 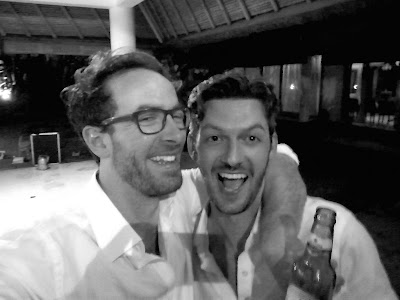 There you have it. I'm not entirely sure how well this will translate to the page, but it seemed to go down pretty well on the night. The high levels of drunkenness and goodwill in the audience may have played a large part in that....

One of the loveliest things about the wedding was the fact that the Anglo-Irish gang of girls DB & I travelled with back in 2011/12 were all in attendance too. We have become an incredibly close group of friends since our chance meeting a short seven years ago - sharing many further adventures and travels in the intervening time. Our group has actually grown tighter as it has grown larger - with partners, fiancees, and eventually husbands, wives and babies added to the merry band too! I count myself incredibly lucky to have randomly encountered such a wonderful bunch of humans in a far-flung country, and unbelievably luckier still that they haven't got bored of me yet. Travelling can be greatly enhanced and improved with the right companions. Travelling alone beats bad company, but shared experiences with the right people are unparalleled.

Three quarters of a decade have passed since we first met. We've all since crossed the 30-years-old milestone and some things have definitely changed about the way we travel - dorms are shunned for proper bedrooms, private transport preferred to buses, decent restaurants over street snacks, getting drunk every day is now frowned upon (every other day is still OK) - but the core of our friendship remains the same. Adventures in good company. Treasured memories with special people.

We all need those friends around whom you can be the purest form of yourself, with no hang-ups or pretences. Those whose mere entering of a room can give a little serotonin boost and a spontaneous smile. People who can provide a little chink of light even in the darkest of times. Regardless of other adversities in your life you'll always remain grateful for the simple yet infinitesimally unlikely coincidence to be alive at the same time. Essentially, the most special of friendships provide an extra level of meaning to your existence, the reassurance that: "You know what, maybe everything will be alright in the end, after all". 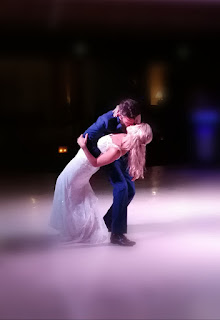