It´s happened! It took a whole ten days, but then it happened.... I got ill.

On the day that Ollie left (last Saturday) I ate some very dodgy street food in Cancun, and while I´m feeling a lot better now, the intervening days have been.... interesting.

As much as I´d like to place the blame elsewhere, I have to admit this was largely my own doing. I missed breakfast because we had to leave early for Ollie´s flight and by the time I got back to the city centre it was past 1pm and I was starving. The first food stand I came to was manned by a wrinkly, old woman and offered a choice of random meat baguettes or cheese and sour cream empanadas. I had two of each. I watched my chef prepare the food: no obvious cleansing to speak of before preparation, and rather grimy hands digging out the mystery meat from it's uncovered container. Disconcerting. Still, I thought, this is authentic Mexico - I have to get into the ´real´ street food sooner rather than later, and the grassroots local stuff always tastes the best. It didn´t. It tasted awful. I´m not sure if ´soggy´ qualifies as a flavour, but that´s all my tastebuds were getting. If I hadn´t been so ravenously hungry, and if there had been other food options in sight, I would have discreetly dumped it and gone elsewhere to eat. But there wasn´t. So I ate it (or half of it - as much as I could bear).

I pretty much accepted whilst eating that I would get a little bit ill from this culinary adventure, but convinced myself that this could actually be a good thing: It's not a bad idea to get your gut used to the proper local cuisine early on in the trip; if you´re ill at the start you´re less likely to get ill further down the road. This is exactly what happened on my last trip: I was appallingly sick for the first few days in Nepal, but then never again for the next seven months - my iron stomach could take anything!

I was less convinced by my own foolish logic two days later, stuck in the toilet on Isla Mujeres. While I wasn´t as elaborately ill as in Nepal, I still had very painful stomach cramps and decided a quick trip to the pharmacy would be a good idea. The guy behind the counter could speak reasonable English and was very helpful, but he couldn´t really help me until I´d had a consultation with the resident doctor. So, I waited upstairs until the very young medical consultant called me in:

"Hablas ingles?", I asked hopefully. "No", she replied. "No hay problema. Hablo espanol!" I said confidently (while not-so-confidently rummaging for my Spanish language bible and quickly searching for the ´health´chapter).

I was in the consultation for a good 1/2 hour, using my phrasebook-assisted pigeon Spanish to stammer out various symptoms, accompanied by extravagant miming. It was during one of these elaborate dramatisations (I think with a reference to ´diarrea´ - which doesn´t need translating...)  that I noticed the following wording on the back cover of my phrasebook: "Chat with the locals and discover their culture - a guaranteed way to enrich your travel experience". Amongst the chaos this struck me as very funny - I don´t think this was the kind of ´enrichment´ the publishers had in mind!

During the moments that the doctor wasn´t laughing at me, she said a few things I understood, a lot of things I didn´t, measured my weight, height and temperature (through a thermometer clamped inelegantly beneath my armpit) and asked my age (one of the few questions I understood first time!)

At the end of our extended exchange, she started to write a prescription... and kept writing... and kept writing... until the whole A5 sheet of paper was filled with a list of various medications and detailed instructions on how to take them (all different and all in Spanish). It's highly possible that I got into the whole illness translation and elaborate symptom charades thing a bit too much and the consultant came to the conclusion that I was at death´s door. Either way, when I presented the list to the pharmacist, he looked a little shocked at first and then spent five minutes gathering together a vast selection of drugs - 1 antibiotic, 1 painkiller, 1 long-term stomach protection thing, 1 rehydration drink, and 2 others I´m still not really sure of their function - all in vivid, pretty colours. I´ve been feeling remarkably better since taking them all (sometimes much, much better and sometimes a bit ´floaty´).

I was initially disappointed that I´d no longer be able to indulge at the beach bar - a fear that was confirmed when the doctor said, "No alcohol. No tequila, no rum, no whisky, no vodka, no mescal". Fair enough, I thought, I have to prioritise my health.... But then she finished: "Cervaza (beer) es OK!" :-)
(I have to admit this victory was shortlived, though - I followed the doctors orders and indulged on plenty of cervazas during my first drugged-up night: a unique drunken experience, but I felt so rough the next day that I´ve decided to abstain until I´ve finished the course of medication).

With all this excitement, I´ve not achieved a great deal else since the last blog. I have returned to, and remained on, the beautiful Isla Mujeres and have established a fairly productive daily routine: get up in time for breakfast at 10.30am, 2 hours proofreading work at a nearby internet cafe (note - this is the only productive part), back to the hostel for a quick workout, cheap lunch from the supermarket, and then to the beach until sunset, after which I fit in a couple of hours volleyball before dinner, and then head down to the (now sober) beach bar until the early hours. I could easily live like this for a very long time, but I am forcing myself to leave tomorrow (Friday) and get on with the ´proper travelling´. Next stop is Merida, and then I´ll continue heading inland across Mexico before dropping down into Guatemala.

Until the next (hopefully fully healthy) entry..... 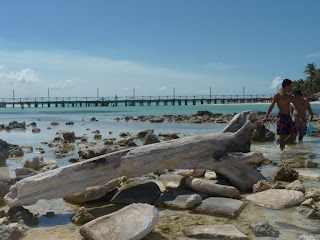 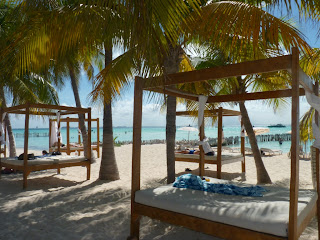 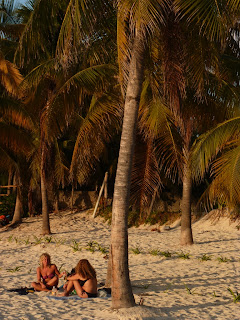 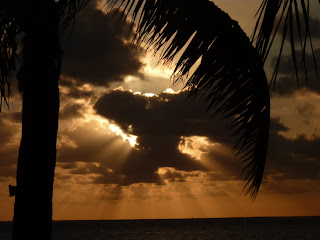 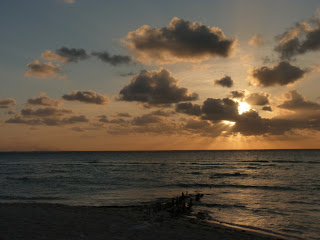 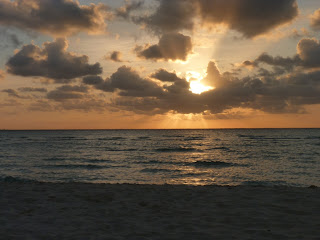 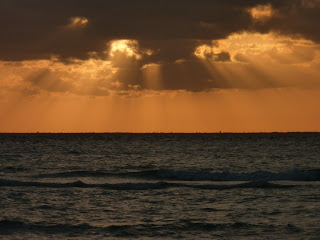 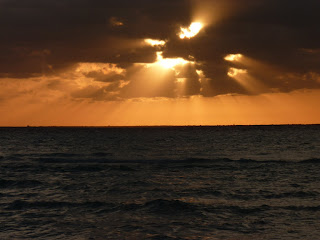 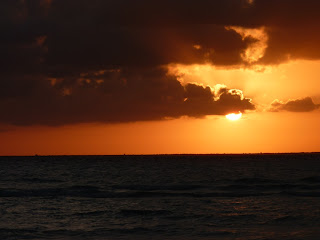 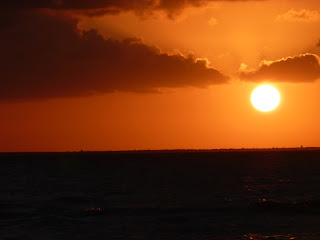 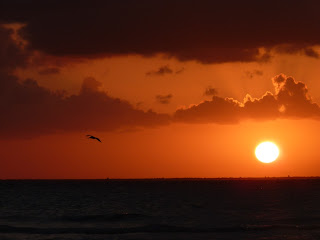